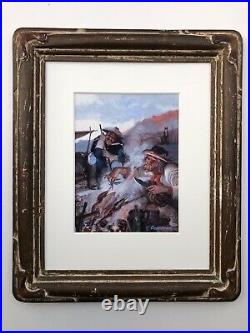 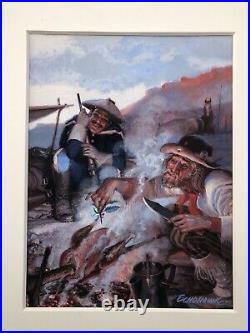 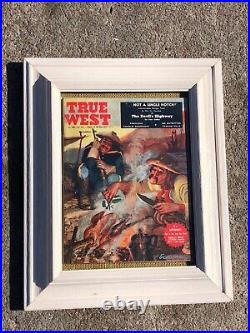 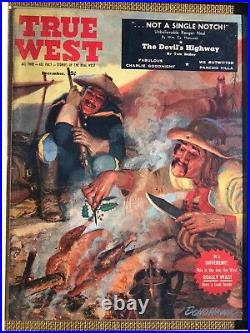 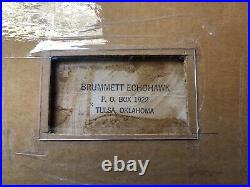 Cover of True West Magazine December 1959. Gouache on Illustration board. Size is 9 3/4 x 13. With frame 21 x 25. Incredible Vintage hand carved Frame! Brummett Echohawk was a distinguished American Indian artist. He died in Bartlesville, OK at the age of 83 in 2006. Echohawk, a Pawnee Indian, was born March 3, 1922 in Pawnee, OK. He served with Oklahoma’s 45th Infantry Thunderbird Division. Company B, 179th Infantry, during World War II. He saw action in North Africa, Sicily and Italy and was cited for bravery in combat. He received three Bronze Stars and three Purple Hearts. Art depicting combat that Echohawk produced during the war was published in the Army’s. And was syndicated in 88 newspapers. Following the war, Echohawk studied at the Detroit School of Art and Crafts and at the Art Institute of Chicago. He also attended the University of Chicago and studied journalism at the University of Tulsa. Echohawk was a former staff artist for the. He was widely known for his paintings of American Indians and the American West. His landscape oil paintings were rendered in an impressionistic style with a pallette knife — and a Bowie knife. Echohawk’s paintings have hung in art museums around the world, including Tulsa’s Gilcrease and Philbrook museums, and he was a former board member of the Gilcrease Museum. One of his most significant achievements was assisting Thomas Hart Benton with the mural. Independence and the Opening of the West. For the Truman Memorial Library in Independence, Mo. Echohawk also was an actor, having performed in plays, television productions and motions pictures. The item “Brummett Echohawk Original Gouache Cover Illustration True West Magazine Dec 59″ is in sale since Saturday, January 9, 2021. This item is in the category “Art\Paintings”. The seller is “consign2you” and is located in Petaluma, California. This item can be shipped worldwide.