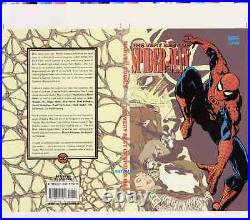 And check out OUR NEWLY LISTED ITEMS. This is an original cover proof for The Very Best Of Spider-Man, published by Marvel Comics. This is a full-color uncut and unfolded proof of the cover on glossy coated cardstock, including both the front and back covers, and is blank on the reverse side. Please note that this is NOT a mass-produced print or lithograph. It is a proof that is created during the production process for the comic. You can see printer color code bars going across the top of the front and back covers. It features a classic straight-on image of Spidey coming right out at you, as well as Spidey in his black alien costume, a menacing image of classic Spidey villain Venom, and more! The cover features art by the great Steve Lightle, who is well-known for classic work on X-Men, The Flash, Tales of the Legion of Superheroes, and many other titles. The proof measures approximately 12 1/2″ by 14 1/4″, and it is in very good condition, with a few indentation crease marks. From the back cover: Over thirty years ago, Marvel Comics published the final issue of a short-lived comics magazine called AMAZING FANTASY, which introduced to the world a new breed of hero: bookish high school outcast Peter Parker, who was bitten by an irradiated spider, and granted the powers and proportionate strength of an arachnid. Thus was born the Amazing Spider-Man, who would grow to become not only Marvel’s flagship character, but one of the most popular figures in illustrated fiction. Collected within this volume are tales that represent the finest of each era of Spider-Man’s adventures. You’ll read classic stories by Spider-Man’s creators, Stan Lee and Steve Ditko, as well as such noted writers and artists as John Romita, Sr. Roger Stern, Ron Frenz, Tom DeFalco, David Michelinie, Todd McFarlane, Mark Bagley, J. DeMatteis, and Sal Buscema. You’ll witness such seminal events as the now-legendary origin of Spider-Man, the rise of the Kingpin in the wake of “Spider-Man No More, ” the chilling scheme behind “The Osborn Legacy, ” and the heart-rending tale of “The Kid Who Collects Spider-Man, ” as well as epic, unforgettable battles with such enemies as Doctor Octopus, the Lizard, and Venom! A world of webbed wonder and arachnid excitement awaits you within… And each story is a shining example of why Spider-Man remains to this day a character who is truly a household word. Don’t miss out on a rare chance to get a very cool and rare comic collectible that you will hardly ever get a chance to see. This is a great piece which would look fantastic framed and prominently displayed. Check out our other auctions for more great items. Check it out, you’ll be glad you did! This item is in the category “Collectibles\Comic Books & Memorabilia\Original Comic Art”. The seller is “satchj3″ and is located in this country: US. This item can be shipped worldwide.