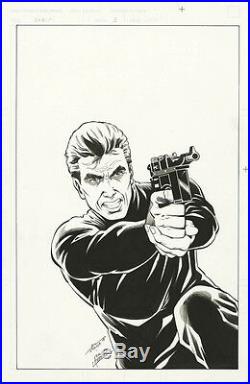 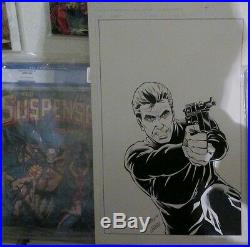 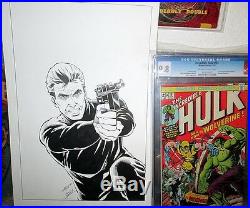 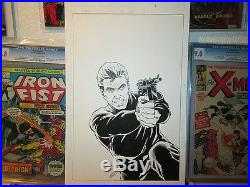 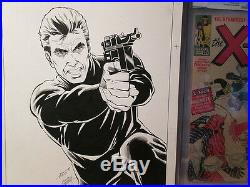 Original Bill Jaaska Art To An Epic Early Sable Cover From 1987. SABLE Issue #3, The COVER ART By BILL JAASKA. This is for FIRST Comics Group, size is 11″ x 17″, on standard comic-book original art paper. Jaaska has worked for many publishers, including Marvel and DC Comics on iconic characters ranging from Wolverine and the Uncanny X-Men to the Teen Titans. However, many fans who remember the late eighties recall the black and white craze, and this cool title, with the awesome covers by Bill Jaaska. Chances to get published cover art from the eighties, from an artist as renowned as Bill Jaaska, are few and far between. In this gripping piece, Sable is about to fire his pistol. Terrific high-impact image in this massive posterized cover, this showpiece. Original Pencils and Inks To An Eye-Popping Copper-Age Cover! This series has always appealed to fans of the superhero comics, as well as fans of Punisher and Dick Tracy and James Bond and Wolverine and other anti-hero characters. As well as those who like to see covers by the artist that is the most well-remembered for the series. Keep in mind, Jaaska is one of the greats, but he had rather limited cover output and much of his art is already tied up in collections and out of reach for most fans, and rare examples of his work are likely to continue to gain popularity and interest, so it’s hard to imagine they will stay cheap forever. Beautiful Clean Line Art, Well-Remembered By Countless Fans Who Remember The Copper-Age. THIS IS THE ORIGINAL LINE ART USED TO CREATE THE FIRST PRINT, WHICH CAME OUT IN EARLY 1988. This is a striking image, making it a superb stand-alone piece to frame and display. This page features tremendous dynamic imagery. PLUS, ORIGINAL COMIC ART IS HUGE, SEE OUR PICTURES THAT FEATURE IT NEXT TO COMIC-BOOKS FOR SCALE. GREAT COMIC-BOOK ART BY TOP ARTISTS AT AFFORDABLE PRICES IS DIFFICULT TO OBTAIN! Great detail work, with a top quality rendition of the title character in a dynamic action pose, and the tightness of the inks is impressive! Any comic-art fan will want to see our other current auctions, featuring dozens of pieces, including lots of vintage cover production art. THIS ARTWORK IS SUPPLE AND CLEAN AND WELL PRESERVED, IT LOOKS LIKE IT HAS BARELY AGED A DAY. This original piece of comic illustration art would be a great addition to the collection of any fan of the unique original artwork to vintage comics. This is the ORIGINAL COMIC ART, which is far bigger in size than a comic book or a magazine. A whopping 11″ by 17″, so you can imagine that this big panel is substantial. A conversation piece of the highest order, you’ll want to have this one framed and displayed prominently. Much too large for our scanner, this jaw-dropper is almost a foot wide and well over a foot tall, so I took mediocre low-res pictures with the digital camera. I included pictures at various angles/lighting, showing the art alongside random comic-books for size reference. The digital pictures make the piece appear dull and drab and shadowy, when in reality it is clean and white, and especially striking in person. This actual one-off item was created by BILL JAASKA (Pencils) and RALPH CABRERA (Inks) in 1987 for First Comics to produce the entertaining adventure hero cover. This gorgeous showpiece is the original, none of it is mere “stats” or photocopies. This masterpiece is unfettered with pesky pasteovers, no need for logo or text elements, — it is especially striking since the inking was done to high standards, so it really emphasizes the high-impact image. This is one-of-a-kind material which would be a great acquisition for any fan of Indy and Small Press superhero comics! Many of you have dealt with us through our ads in CBM, CBG, O. We are secure packagers and prompt shippers so expect to be pleased. This irreplaceable item is the only one of its kind… Great item for the serious eighties superhero ephemera buff, or just the art investor or Sable fan who enjoys owning true rarities to keep himself satisfied visually, while keeping his portfolio diversified in a most impressive fashion! As Usual: LOW ASKING PRICE AND NO RESERVE! SATISFACTION GUARANTEED 14-day return privilege. KEY COMICS IS ALWAYS DEALING IN COMICS & ART! For more samples from our diverse inventory, including CGC-Graded Comics, plus more Comic Line Art, and DC COVER ART from the historic Jack Adler Collection that we listed in assorted categories, please see our other auctions. Good Luck and Happy Collecting! The free listing tool. The item “Sable 3 ORIGINAL COVER ART Bill Jaaska 1987 First Comics HAND DRAWN Signed B&W” is in sale since Saturday, February 1, 2014. This item is in the category “Collectibles\Comics\Original Comic Art\Covers”. The seller is “keycomics” and is located in Mesa, Arizona. This item can be shipped worldwide.