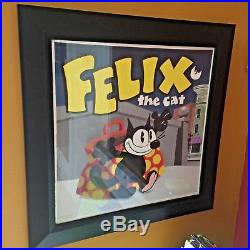 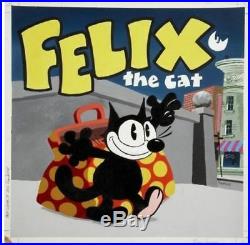 Felix the Cat and His Magic Bag. Original Art (Scholastic, 1986). Colorful cover art by Frank Hill. Mixed media on heavy paper. In Very Good condition. Signed by Frank Hill at the right (inside the art), and inscribed and signed along the left edge. This item is Framed as well! RARE ONE OF A KIND ITEM!! Frank Hill is a renown cartoonist, illustrator and designer, whose work has appeared in newspapers, books, comics and a host of other media. He was Frank O’Neal’s assistant on the newspaper strip’Short Ribs’ since the 1960s and took over completely after O’Neal’s retirement in 1973 until the strip’s end in 1982. Hill also assisted Charles Schulz on’Peanuts’ artwork for related products and children’s books, and worked with Hank Ketcham on’Dennis the Menace’. During the’60s and’70s, Hill also served as a ghost artist on several comic books by Dell starring newspaper comic characters, including’Short Ribs’,’Dennis the Menace’ and Lee Holley’s’Ponytail’. Hill has also worked with other licensed characters, such as’Yogi Bear’,’The Flintstones’,’The Jetsons’,’Felix The Cat’,’The Pink Panther’ and’Mighty Mouse’. Hill wrote and drew the’Tom & Jerry’ strip for a while, wrote the’Bugs Bunny’ newspaper strip during Lee Holley’s run in the 1980s and worked on Harvey’s’New Kids On The Block’ title in the early 1990s. The item “Frank Hill Felix the Cat and His Magic Bag Cover ORIGINAL ART Scholastic, 1986″ is in sale since Wednesday, April 24, 2019. This item is in the category “Collectibles\Comics\Original Comic Art\Comic Strip Art”. The seller is “nevermindgallery” and is located in Saint Paul, Minnesota. This item can be shipped worldwide.