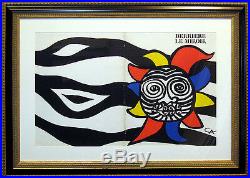 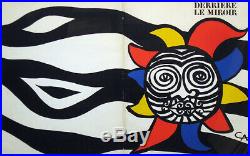 Derriere Le Miroir #156 Cover. Original Lithograph by Alexander Calder. From the 1966 edition of Derrière Le Miroir (#156). From the 1st edition soft-cover folio published by Galerie Maeght. It is an unsigned, unnumbered edition. Brand New Museum Quality Frame! Framed Size: 22.75″ x 29.75″. Condition of the Lithograph is Good. This was the cover of the book. The frame is brand new. 100 percent guarantee of authenticity. Certificate of Authenticity is included. The art journal “Derriere le Miroir” (abbreviated to DLM) appeared in print from 1946 to 1982. Published by the French art dealer, collector and publisher Aime Maeght, it ran to two hundred and fifty issues. Galerie Maeght, which opened in. Exhibited the work of distinguished contemporary artists, including Bonnard, Matisse, Braque, Leger, Steinberg, Chagall, Bram, van de Velde, Miro, Kandinsky, Giacometti, Ubac, Bazaine, Calder, Derain, Chillida, Tapies and many others. Publication of DLM launched Maeght’s career as a publisher. The art magazine “Derriere le miroir” – designed like an exquisite work of art – always appeared in the same format (38 x 28 cm) and included numerous original lithographs by the above mentioned artists as well as a great many reproductions. Poets and men of letters such as Louis Aragon, Samuel Beckett, Rene Char, Paul Eluard, Jacques Prevert, Raymond Queneau, Pierre Reverdy, Jean-Paul Sartre and others embellished the work with previously unpublished texts. Many of the lithographs originally published in DLM are sought-after collector’s items today; the earliest issues of DLM are rarely encountered in good condition. These charges are the buyers responsibility. Be sure to add me to your favorites list. Alexander Calder was a sculptor of international renown. He grew up in an artistic family; both his father and his grandfather were accomplished and dedicated sculptors, who created heroically scaled figurative monuments. S Art Students League, but the significant influence on his early career occurred during the two weeks he spent sketching at the Ringling Brothers and Barnum & Bailey Circus. From his drawings of the performers, he created a miniature animated circus, which introduced the artist to the Parisian international art world. In 1926 Calder also began his first independent wire sculptures. About 1930 he began to create abstract works, influenced by the art of Joan Miro as well as that of Piet Mondrian, whose Neoplastic colored rectangles inspired Calder to realize a vision of “oscillating” art. He eventually developed two sculptural modes: “stabiles, ” or stationary abstract sculpture; and “mobiles, ” or motor-powered art. He soon gave up mechanically-driven motion, however, for that produced naturally by air and wind. Beginning in the late 1930s, Calder commuted between his home in. And his work was exhibited extensively both in. And abroad, with major sculptures installed in public places in major cities throughout the world. The item “Alexander Calder, Derriere le Miroir 156 Cover Original Lithograph Custom Framed” is in sale since Wednesday, February 15, 2012. This item is in the category “Art\Art Prints”. The seller is “american_design_ltd” and is located in Aurora, Colorado. This item can be shipped worldwide.