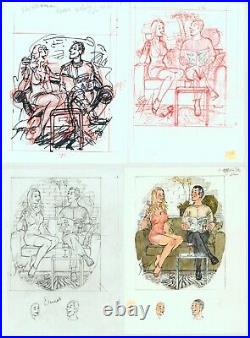 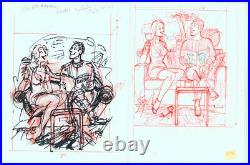 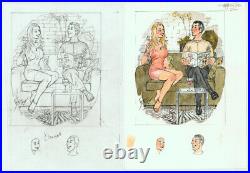 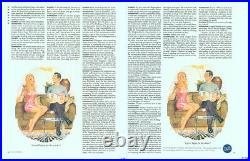 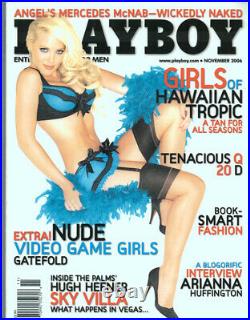 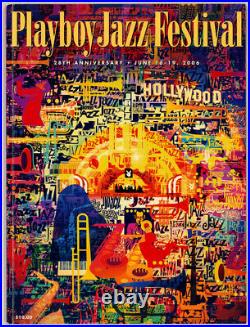 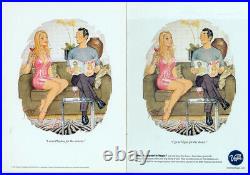 Each piece in this four-piece original art set measures approximately 8 1/2 x 11 inches and feature the work of acclaimed Playboy artist Doug Sneyd. These are the initial preliminaries in creating a cartoon for the City of Las Vegas for their Playboy Jazz Festival program and also – later that year – appeared in Playboy Magazine (the November, 2006 issue). Initially, however, the powers that be were concerned about the wine glasses and that the dress was too revealing. They came around to the wine glasses, but Sneyd did adjust the dress for the final cartoon. As the cartoon was to appear on facing pages – one with the man exclaiming “I read Playboy for the articles, ” and in the other the woman replying “I go to Vegas for the shows” – Sneyd simply created two additional faces, one each for the man and woman. Included in the listing are four original pieces of art – the initial prelim, two tighter pencil sketches, and a Xerox copy of the tightest of the two pencils that Sneyd then hand-colored (all are shown in scan one and then two each in scans two and three). Also included (scans four and five) are Xerox copies of the two cartoons as they ultimately appeared and the cover to the Playboy issue they appeared in. Please note- these last three are copies only. The magazine itself is not included. Lastly, a copy of the Playboy Jazz Festival program is also included in with the listing (cover shown in scan six and interior cover and first page spread with the cartoon is shown in scan seven). Doug Sneyd began his career in. Commercial illustration before going freelance to work for a variety of book and magazine publishers. He also illustrated single-panel cartoons for the. Canada’s largest circulation newspaper (cartoons that were eventually syndicated throughout North America). In 1964, he began working for Playboy and his gag strips have appeared in the magazine ever since. Throughout his career, he has contributed over 500 cartoons in all and became a favorite artist of Playboy readers. The item “Doug Sneyd Original Art Sketch Set What Happens in Vegas Playboy Jazz Festival” is in sale since Sunday, October 11, 2020. This item is in the category “Collectibles\Comics\Original Comic Art\Covers”. The seller is “empire.auctions” and is located in Ringgold, Georgia. This item can be shipped to United States, Canada, United Kingdom, Denmark, Romania, Slovakia, Bulgaria, Czech republic, Finland, Hungary, Latvia, Lithuania, Malta, Estonia, Australia, Greece, Portugal, Cyprus, Slovenia, Japan, Sweden, South Korea, Indonesia, Taiwan, South africa, Thailand, Belgium, France, Hong Kong, Ireland, Netherlands, Poland, Spain, Italy, Germany, Austria, Bahamas, Israel, Mexico, New Zealand, Singapore, Norway, Saudi arabia, United arab emirates, Qatar, Kuwait, Bahrain, Croatia, Malaysia, Chile, Colombia, Costa rica, Panama, Trinidad and tobago, Guatemala, Honduras, Jamaica, Barbados, Bangladesh, Bermuda, Brunei darussalam, Bolivia, Ecuador, Egypt, French guiana, Guernsey, Gibraltar, Guadeloupe, Iceland, Jersey, Jordan, Cambodia, Liechtenstein, Sri lanka, Luxembourg, Monaco, Macao, Martinique, Maldives, Nicaragua, Oman, Peru, Pakistan, Paraguay, Reunion, Viet nam, Uruguay, China, Switzerland, Brazil, Cayman islands, Ukraine.