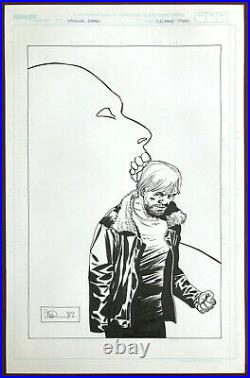 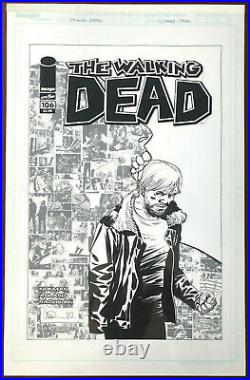 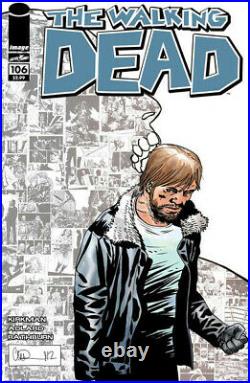 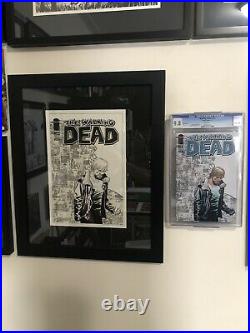 Issue #106 was Charlie Adlard’s 100th issue drawing interiors for the series. There were three published covers for the issue: Cover A (a wraparound cover), Cover B (this one), and an exclusive Infinity & Beyond cover homage to Issue #1, which was limited to 2000 copies. This cover, drawn the year (2012) before being published, commemorates Adlard’s milestone by showcasing Rick amid important parts of the story from issue 7-105. Highlights include first appearances, deaths and key events. Charlie Adlard pencils and inks on an 11″ x 17″ Image comic art board, signed and dated in box by Adlard. First picture shows the pencil/ink by Charlie Adlard. Second photo shows the art with title and background stats which are on a transparent overlay, and the last photo shows the comic as published. (Frame in the last photo not included). Covers in general are tough to come by, especially ones from before 127. There are many locked away in a black hole collection, and many others in private collections. I will have a few pieces of TWD art for sale, including this one, for a short time. Once one or two sell, the remaining pieces will be pulled and put back in my collection. This item is in the category “Collectibles\Comic Books & Memorabilia\Original Comic Art”. The seller is “birdmanbatman” and is located in this country: US. This item can be shipped to United States, Canada.