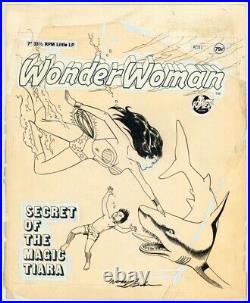 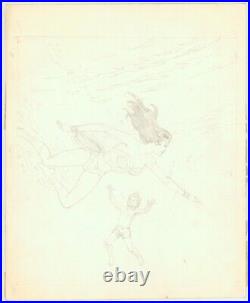 This original cover art to Power Records’ Wonder Woman: Secret of the Magic Tiara features the work of Neal Adams with inks by Russ Heath. It is drawn on vellum that has been affixed to sketch paper the reverse of which, shown in the second scan, features Adams’ original pencils – apparently, Heath drew the inks on the vellum as it lay over Adams sketch, then the finished vellum piece was affixed to the other side of the sketch. Shortly thereafter, the Wonder Woman title logo, story title, Power Records logo, etc. Were pasted onto the vellum. The piece measures approximately 11 1/2 inches by 14 inches, is in fair condition see scans- the vellum has tears along its edges and has been cut at the top portions… Also has obvious age tanning. Despite the age wear, this is still a great piece of art – a Neal Adams cover, no less, and the artwork used for the 1976 release of this Power Record. The first scan shows the front side of the artwork (the vellum piece), the back side shows Adams’ original pencils (the second scan), and the third image shows the front and back of the record cover itself (please note that this last scan is shown for reference only- the record is not included in with the listing). The listing is for the original artwork only. Neal Adams (1941 – 2022) is regarded as one of the top three comic artists of all time, behind only Will Eisner and Jack Kirby on Atlas Comics top 100 list. Through his application of commercial art techniques and production philosophies Adams created a divide between all that went before his most prolific years (1966 – 1972) and all that followed, producing not only a comic book renaissance but inspiring generations of followers such as Bill Sienkiewicz, Frank Brunner, Mike Ploog, Michael Golden, and many others. Adams not only changed comic books, but the comics industry itself, helping secure Jerry Siegel and Joe Shuster a pension as well as the much-deserved recognition for their creation, the first super hero, Superman. These were among the industries first steps towards creator rights. He has also drawn some of comics most popular characters. Best known, unquestionably, for Batman, Adams also illustrated numerous other characters during popular runs on Green Lantern/Green Arrow and Superman as well as shorter but no less impressive works on Conan, the Flash, and the X-Men. And h is covers for DC’s horror titles – House of Mystery and House of Secrets – are among the best to ever grace. Adams has received numerous Alley Awards, including Best Cover, Best Full-Length Story, and Best Pencil Artist. His Shazam Awards include best Individual Story for both 1970 and 1971 and Best Pencil Artist. He was inducted into the Will Eisner Comic Book Hall of Fame in 1998 and the Jack Kirby Hall of Fame in 1999. Launched in 1948, Peter Pan Records became one of the largest and most successful specialty record labels for children. Initially focused on music and songs, they branched out into book and record sets which featured illustrated storybooks (later comic books) with the action of the story set to music and featuring narration, sound effects, and voice actors. In the 1970’s, these were released under their. Subsidiary label, Power Records. While they featured a wide variety of properties (from Star Trek and Planet of the Apes to Kojak and Scooby-Doo), among the most popular included their line of super hero stories with both DC and Marvel characters. These include Superman, Batman, Wonder Woman, Spider-Man, the Incredible Hulk, the Fantastic Four, Conan the Barbarian, and more. The heyday of these sets were in the 1960’s into the early 1980’s but, by the 1990’s, the children’s record market had declined. Today, surviving Power Records from that bygone era are now popular collectibles. They are not only fondly remembered by the children they helped to learn to read, but also for opening up a doorway into the vast universe of comics as, for many children, their first exposure to the medium of graphic storytelling was not comic books themselves, but the just-as-thrilling tales found in Power Records. This item is in the category “Collectibles\Comic Books & Memorabilia\Original Comic Art”. The seller is “empire.auctions” and is located in this country: US. This item can be shipped to United States, Canada.