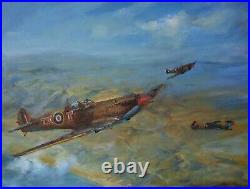 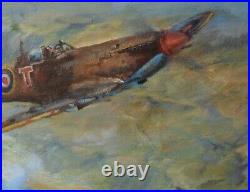 A rare opportunity to acquire an incredible original Martin Ulbricht painting. “Spitfire – High Cover Over Sicily; 1943″. BY THE AMAZING ARTIST MARTIN ULBRICHT! “Spitfire – High Cover Over Sicily; 1943″ by Martin Ulbricht. Spitfire MkVIII fighters from 145 squadron providing top cover over Sicily! Measurements; 18 inches x 24 inches (46 cms x 61 cms). An Amazing Blue Chip Investment Opportunity to Acquire an Original. Invest in one of our paintings, rather than risky bank investments, where you can actually touch your investment. Take pleasure in looking at it and watch it appreciate in value over the years!! G only one of it’s kind in the world!!! Scarcity alone guarantees the investment!!!! Art has long been regarded as a strong and safe investment. Investment in paintings was discussed recently on Bloomberg television as a sound investment as a hard asset like Gold, Platinum Silver etc. Go to Latest Art news on Asgard Arts and see. Hang your investments on the wall b. Y Ellen Kelleher Published October 22 2010 in the Financial Times. Born in 1948, Martin Ulbricht has painted all his life having been inspired at a young age by artistic works seen in a wide variety of exhibitions. He is largely self taught but an early inclination to pursue a career as an artist gave way to one in aviation. His years in aviation allowed him the time to continue to develop his technique and style and this period of his life provided a multiplicity of inspiration on a variety of themes. Ulbricht has an impressionistic/realistic approach to his subject matter being inspired by places he has visited, scenes he has seen and his own mood when painting. Once he has a mental image of a subject, he likes to prepare the canvas to a ground colour to suit the image and he initially puts the whole image onto the canvas as quickly as possible. Time is then spent on the detailing and on reflection so bringing the painting up to its finished state. It is this process which enables Ulbricht to create paintings which give the viewer constant pleasure. Edward Seago has been a major influence with regard to his use of colour, brushwork and the subjects he depicted, in particular his treatment of skies, whilst Terence Cuneo influenced Ulbricht’s approach to transport based themes and John Singer Sargent has been an inspiration for Ulbricht’s portraiture. The dominant themes in his work involve views of Venice, big skies, sunsets and beaches together with genre paintings of transport images involving more technical detail. His contemporary landscapes, cityscapes, beach scenes and sunsets have become much sought after. Portraiture has always been, and still remains, an abiding passion. Having decided to pursue a career as a professional artist, Terence Macklin’s advice helped Ulbricht to be more focused with regard to his subjects. As a professional artist, Ulbricht likes to remain flexible regarding style and subject but he always stays true to his premise that, whatever the painting it must give its owner constant pleasure. Ulbricht exhibits and sells his work through galleries in the South East, London, Lincolnshire, on the internet, at the Affordable Art Fair and by private commission. GUARANTEED TO BE 100% ORIGINAL AND GENUINE WITH C. The item “ORIGINAL MARTIN ULBRICHT OIL Spitfire High Cover Over Sicily 1943 PAINTING” is in sale since Sunday, August 23, 2020. This item is in the category “Art\Paintings”. The seller is “asgard-arts” and is located in Buckinghamshire. This item can be shipped worldwide.