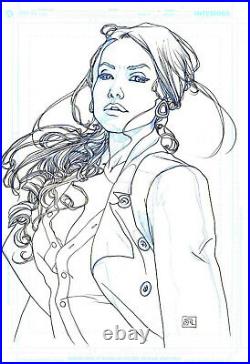 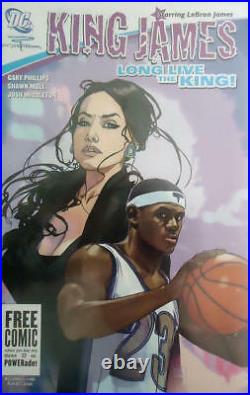 Original Comic Art for King James – James LeBron comic – DC Comics 2006 by Joshua Middleton. Original comic art for the Cover of James LeBron Comic by DC Comics 2006 called King James: Long Live the King. Three variant covers were done for this book including this one, one by superstar James Jean and a third by Sunny Lee. This is finished pencils and ink work by Joshua Middleton. The final comic cover was composed of two images drawn as original art but combined digitally and colored for the final production cover. This is the original art for part of that cover featuring a beautiful Middleton girl. This cover was done in the early years of Joshua breaking into comics. He had just come off his run of New Mutants covers and the NYX series where he drew the first X-23 character and there was a lot of excitement about this young artists career. This is prime Middleton art from what I think was his best era while still hungry and proving himself. I bought this directly from Josh at a convention in 2007. 11.5 x 17.5 inches and clean. The item “James Lebron Comic King James Cover Original Comic Art Joshua Middleton Josh” is in sale since Friday, October 5, 2018. This item is in the category “Collectibles\Comic Books & Memorabilia\Original Comic Art”. The seller is “comixfan” and is located in Mississauga, Ontario. This item can be shipped worldwide.