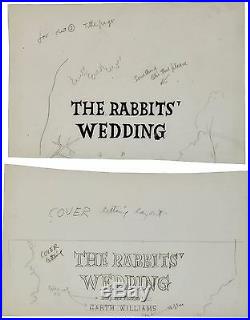 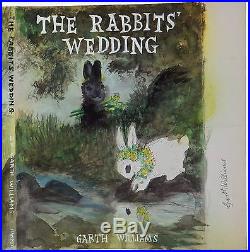 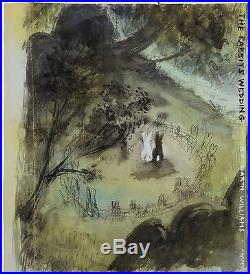 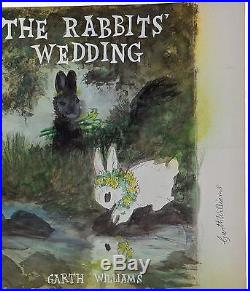 GARTH WILLIAMS ENORMOUS COVER’ PRELIMINARY DESIGN WATERCOLOR PAINTING. ENORMOUS PRELIMINARY WATERCOLOR FOR THE COVER DESIGN ARTWORK OF THE RABBITS WEDDING, 23 X 12.5, accompanied by two additional pieces in vellum with notes and titles for the cover art! A stunning, extremely large double page watercolor by Garth Williams, which once framed would have an impressive presence between the sheer size of the piece and the spectacular artwork. The art is a preliminary painting for the cover design of The Rabbits Wedding, most likely intended for the dust jacket. The vibrant, yet soft double page spread of the book cover/jacket depicts the proposed art for the front, back and spine of the cover. A warm and endearing illustration of the black rabbit in the background holding a floral bouquet, appearing mesmerized while watching with admiration the adorable white rabbit. The white rabbit is adorned with a headpiece of flowers, and is posed sitting on a rock, peering down into the lake. The piece is incredibly detailed including beautiful reflections in the lake of the tall grasses, the spectacular forest scene, and of the white rabbit. The painting for the rear panel of the cover depicts the two rabbits sitting side by side in the forest, gazing over a hill. Williams also artistically painted in the proposed locations and styles for the title along the spine and front of the cover art. Rendered in soft watercolors and signed by Garth Williams in full signature as Garth Williams to the outer right margin in ink. The piece has the expected folds as it appears to have wrapped about a book to see how it would look. Additionally accompanied by two pieces in vellum, each approximately 10.5 x 6.5 with graphite and ink details and notations for the cover design. A beautiful one-of-a-kind piece of exceptionally rare artwork. In 1958 Garth Williams wrote and illustrated The Rabbits Wedding, a book that caused a small uproar. The illustrated picture book, aimed towards children aged 3 to 7, depicted animals in a moonlit forest attending the wedding of a white rabbit to a black rabbit. In 1959, the book became the center of a controversy, with Alabama Senator E. Eddins and Alabama State Library Agency director Emily Wheelock Reed as the key players. Senator Eddins, with the support of the White Citizens Council and other segregationists, demanded that the book be removed from all Alabama libraries because of its perceived themes of racial integration and interracial marriage. Emily Wheelock Reed reviewed the book and, finding no objectionable content, determined it was her ethical duty to defend the book against an outright ban. A battle ensued between Reed and her supporters, and the segregationist faction in the legislature. In the end, the book was not banned outright, but rather placed on special reserve shelves in the state library agency-run facilities. Since the controversy, there has been more critical analysis done on the book. Some have noted the obvious logic of illustrating the rabbits with two different colors so the reader might tell them apart more readily. Others, in their quest to depoliticize the book, have claimed a perception of the black and white motif as, perhaps, a reference to yin and yang i. Male and female, though, inconsistently, the color-to-gender associations in the book are reversed. About the controversy, Williams stated, I was completely unaware that animals with white fur, such as white polar bears and white dogs and white rabbits, were considered blood relations of white beings. I was only aware that a white horse next to a black horse looks very picturesque. Williams said his story was not written for adults, who will not understand it, because it is only about a soft furry love and has no hidden message of hate. A copy of the original invoice will be included with each piece, and will provide both provenance and authenticity for the art. Garth Williams was a prominent illustrator of several of the most prominent childrens books including Stuart Little (1945), Charlottes Web (1952), The Cricket In Times Square, and The Rescuers (1959). We specialize in first edition rare books and original illustration art. The item “GARTH WILLIAMSENORMOUS ORIGINAL COVER ART WATERCOLOR PAINTINGRABBITS’ WEDDING” is in sale since Tuesday, November 20, 2018. This item is in the category “Art\Art Drawings”. The seller is “iwc_2004″ and is located in New Canaan, Connecticut. This item can be shipped to United States, Canada, United Kingdom, Germany, Australia.