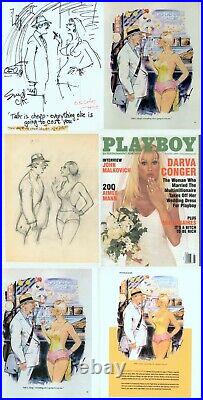 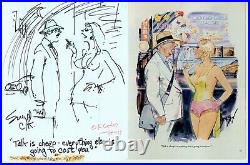 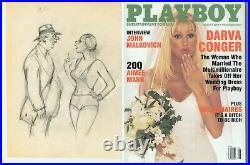 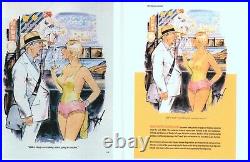 From the August 2000 issue of Playboy (and later also used as the back cover artwork to The Art of Doug Sneyd), this collection features the preliminary illustration as well as an additional pencil sketch created by acclaimed illustrator Doug Sneyd for that issues gag cartoon. The first scan features everything included in the listing- with further scans for greater detail, including scan two which is the original concept sketch rendered on copy paper and approval by Hugh Hefner (and is denoted by Hugh Hefner himself as “OK Color HMH” as in okay to proceed, Hugh Marston Hefner) as well as the page with the finished cartoon (removed from that issue). The third scan features a later, more detailed, pencil prelim as well as a Xerox copy of the cover to the issue this cartoon appears in (please note that the magazine itself is not included in with the listing). The final scan shows two Xerox copies, one of the cartoon as it appeared in Playboy and the other is the cartoon as it appears on the back cover to The Art of Doug Sneyd. Condition on each piece is good- these were prelims and as part of the creative process are not expected to be kept perfect. Doug Sneyd began his career in. Commercial illustration before going freelance to work for a variety of book and magazine publishers. He also illustrated single-panel cartoons for the. Canada’s largest circulation newspaper (cartoons that were eventually syndicated throughout North America). In 1964, he began working for Playboy and his gag strips have appeared in the magazine ever since. Throughout his career, he has contributed over 500 cartoons in all and became a favorite artist of Playboy readers. This item is in the category “Collectibles\Comic Books & Memorabilia\Original Comic Art”. The seller is “empire.auctions” and is located in this country: US. This item can be shipped to United States, Canada, United Kingdom, Denmark, Romania, Slovakia, Bulgaria, Czech Republic, Finland, Hungary, Latvia, Lithuania, Malta, Estonia, Australia, Greece, Portugal, Cyprus, Slovenia, Japan, China, Sweden, South Korea, Indonesia, Taiwan, South Africa, Thailand, Belgium, France, Hong Kong, Ireland, Netherlands, Poland, Spain, Italy, Germany, Austria, Bahamas, Israel, Mexico, New Zealand, Singapore, Switzerland, Norway, Saudi Arabia, United Arab Emirates, Qatar, Kuwait, Bahrain, Republic of Croatia, Malaysia, Brazil, Chile, Colombia, Costa Rica, Panama, Trinidad and Tobago, Guatemala, Honduras, Jamaica, Barbados, Bangladesh, Bermuda, Brunei Darussalam, Bolivia, Ecuador, Egypt, French Guiana, Guernsey, Gibraltar, Guadeloupe, Iceland, Jersey, Jordan, Cambodia, Cayman Islands, Liechtenstein, Sri Lanka, Luxembourg, Monaco, Macau, Martinique, Maldives, Nicaragua, Oman, Peru, Pakistan, Paraguay, Reunion, Vietnam.